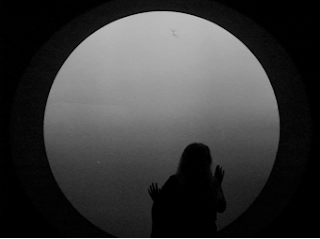 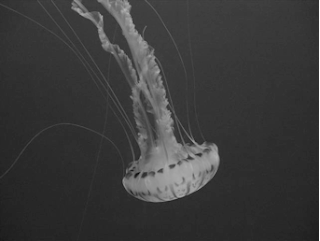 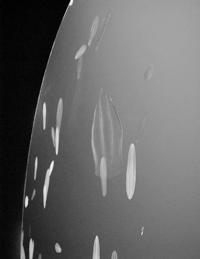 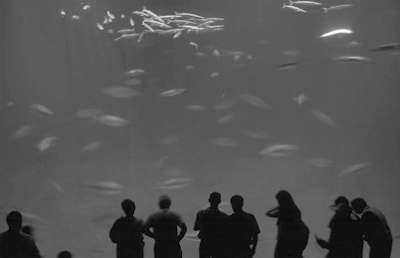 Figure. The Outer Bay, Hayward, 2000
As I leave the “Drifters” display, I turn to my left and am confronted with another view of the “Outer Bay.” However, here, tunas, sunfishes, mackerels, and sharks worry the waters of a tremendous aquarium. Not only have the inhabitants changed in this other “Outer Bay”—no dreamy, stinging drifters here—but also has the environment. And, above all, the scale has changed dramatically back to that of fellow large vertebrates. The difference between fish and mammal is swamped by the fellowship of scale.  There are no new-age sounds, and there are no special effects. Here, there is no doubt that I am looking at the top of the food chain. I am back in vertebrate space. The lights from above this aquarium that radiate through the water are beautiful, but not of the same quality as the “Drifters” exhibit. Here, the space is understandable. These predators have armament not too different from my own—not nematocysts and nerve toxins. I know what position I am in—you are looking at large fishes that move from the back of the tank to the front. The aquarium is full of depth—the tiger sharks awe me when they emerge from the back shadows and glide across the front wall of transparency. It is beautiful—they are beautiful—and yet, I begin to miss the mysterious and submersive space I just left.
Acknowledgments
I want to thank Donna Haraway, Vicki Pearse, and Jennifer Gonzalez for reading and commenting on early drafts of this essay. I presented a version of this essay—focused on diffraction, hermaphroditism, prepositional knowledge, and differential becoming—at the Society for Literature, Science and the Arts annual Conference, 2004, Duke University. I want to thank Katie King, Karen Barad, and Nigel Rothfels for their engagement with my work at that conference.
[1] This quote comes from Rachel Carson, The Sea around Us (New York: Oxford University Press, 1979).
[2] The parallel between jellies and aliens is further emphasized by The Monterey Bay Aquarium’s video production, Jellies and Other Ocean Drifters (1996), narrated by Leonard Nimoy, the former Star Trek actor. Through out the narrative, he compares jelly life forms with the unimaginable forms seen during his travels on the ENTERPRISE. One might say that aliens have always been here beneath the ocean’s waters.
[3] The aquarium was a gift to the public by David and Lucile Packard. “The original cost of the aquarium was approximately $55 million.” The David and Lucile Packard Foundation were created in 1964 by David Packard (1912–1996), the co-founder of the Hewlett-Packard Company, and his wife, Lucile Salter Packard (1914– 1987). For more details see http://www.packard.org/home.aspx.
[4] The origin story of the “aquarium” is open to debate, but Celeste Olalquiaga in The Artificial Kingdom: A Treasury of the Kitsch Experience (New York: Pantheon Books, 1998) suggested that it begins with European, white, upper class women. In 1832, Madame Jeannette Power “initiated the scientific use of the aquarium with her ‘cages à la Power,’ glass cases lowered into the ocean to study marine animals” (48). Undoubtedly, the proliferation of public and private aquariums results from the discovery that water plant aeration produced healthier and longer-living organisms—this finding goes to M. de Moulins and Anna Thyne in the 1840’s. For further consideration of Aquarium history consult Leighton Taylor, Aquariums: Windows to Nature (New York: Prentice Hall General Reference, 1993) and Lynn Barber, The Heyday of Natural History 1820-1870 (New York: Doubleday & Company, Inc, 1980).
[5] For more information: Shedd Aquarium, http://www.sheddaquarium.org/; New York Aquarium, http://www.nyaquarium.com/; Waikiki Aquarium, http://www.waquarium.org/.

[6] In her article, Translating Cuttlefish: Underwater Lifewritings, Clare Brant writes about the translation of going underwater into words. She writes, “Genre boundaries are fluid, in life writing and in the sea . . . . It is as if the literal pressure of going underwater puts entity under pressure. Bodies change underwater; senses alter; minds have different thoughts” (2009:114).
[7] I’m reminded here of Tara Rodgers provocative work on the fluidity of sound. “There has been a long-standing association of water and sound in observational acoustics from antiquity through Chaucer to Helmholtz and beyond, with the sound of a stone hitting water producing a visual counterpart, which was then mapped back onto the invisible movements of sound waves” (under review: 246).
[8] Freya Sommer, an aquarist who specialized in jellies, was instrumental in making jellies a year-round exhibit. Jellies are part of the plankton, drifting with the currents.  Most medusa-type jellies have an unusual, two-stage life cycle. The familiar swimming medusa is either male or female and produces sperm or eggs that combine to produce thousands of microscopic larvae. If these larvae find a suitable surface to attach them to, they develop into tiny sea anemone-like polyps. Each polyp buds off additional polyps, eventually giving rise to a clonal assemblage of several hundred individuals. When conditions are just right, a polyp will change form and take on the appearance of a stack of little saucers. Each saucer (or ephyra) then splits off and swims away, growing and developing into a medusa. Sommer needed to be able to assist the reproductive cycle of different species of jellies to insure a constant population of jellies—availability of jellies is unpredictable. Certain species were already relatively easy to cultivate, e.g., moon jellies (Aurelia aurita). But, the purple-striped jellies (Pelagia colorata) and the sea nettles (Chrysaora fuscescens) required scientific breakthroughs to understand their previously unknown life cycle. Powell 261-262.
[9] The “future primal”? The MBA is not new to science fictions. The reader may recall Star Trek IV: The Voyage Home with its virtual humpback whale swimming in one of the MBA’s tanks. Here the MBA functioned as site of contact between global space and extraterrestrial space, and a place of planetary hope. As the narrative goes, the aquarium had conserved the last of the humpbacks, the singing whales. We discover that the whales had been in “conversation” with extraterrestrial life forms for eons. The extinction of the whales threatened to destroy the planet. The discourse of conservation is obvious and everywhere present in the film.